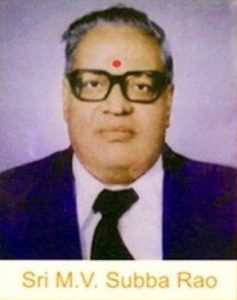 Sri Maturi Venkata Subba Rao, after whom the college was named, was born on 1st October 1920. Having lost his mother on the very 7th day of his birth, he went through many hardships in early life for prosecuting his studies. He started his career as an income tax practitioner.

His pioneering nature and his great love for cultural activities made him tread many new paths, in each of which he made a mark and contributed to the society. To encourage cultural activities, he started “Vignan Kala Kendram” in 1961. He encouraged many cultural societies and innumerable artists with financial and moral support all through his life.

He started ‘Matrusri” group in 1975 along with Sri Maturi Gopala Rao, Sri ML Kanta Rao, Sri Konijeti Venkata Ratnam and others, which constructed one of the first residential complex in Hyderabad called Matrusri apartments in 1975. He was an active member of Y’s Mens International from 1974. He started Brahmin Students Hostel in 1977 to help the poor students.

Sri MV Subba Rao, along with like – minded persons, established “Matrusri Education Society” in 1980 with the intention of imparting Technical Education in private sector, to meet great demand for engineers in the state and started MVSR Engineering College in 1981. He breathed his last on 1992. After 25 years of its service to technical education as a premier institute, today in its Silver Jubilee year, the college stands as a testimony to the vision of Aarshadharmasri Late Maturi Venakata Subba Rao.