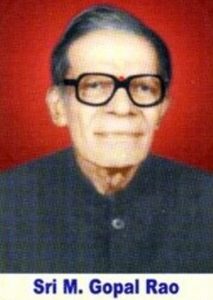 Born on September 10, 1917, Sri Maturi Gopal Rao had a brilliant academic career having passed AMIE (India) examinations in the highest rank. He was directly recruited to the Gazetted cadre in the engineering field having topped in the selection by the Hyderabad Public Service Commission. Apart from investigations of water supply, drainage and other irrigation works, he had the privilege of constructing the largest masonry structure of the world, the Nagarjunasagar Dam, right from the foundations to completion. He was Chief Engineer, Andhra Pradesh and also Chief Engineer in Government of India, Ministry of Energy, in the construction of Sale Hydro Electric Project. He Served as Consultant to the Government of India in the Ministry of Energy, and as the Chairman, Andhra Pradesh State Construction Corporation Ltd., a State Government Undertaking. As Chairman of the Corporation, apart from construction of canals, buildings, he was associated with the construction of Srisailam Dam, the largest Hydro Power Structure then under, construction in India.

As a delegate of India, selected by the Indian National Committee, he attended the International Congress on Large Dams held in Montreal in 1970. He was deputed to Afghanistan in April 1973 for investigations and advice on water resources and finalization of the schemes for dams across various rivers in that country. He was selected by the United Nations Team for Assignment of building dams in British Guyana in 1972. He visited countries around the World-Europe, USA & Japan and traveled in the Middle East Countries in 1978 for exploration of constructional activities. He had authored a book “Nagarjunasagar – the EPIC of a Great Temple of Humanity” which was published by Bharatiya Vidya Bhavan. He passed away on September 2, 1997.